Full of excitement , I am overwhelmed by a strange British man’s voice from inside my shed.  Within an instant I began to see a cat slowly walk out from behind this box.  It emerges from the oval-shaped cutout that appears to be a doorway.

Then I noticed he was walking on his two hind legs and dressed as a classic British or Irish man.  He appeared to have just attended the horse track on Derby Day. 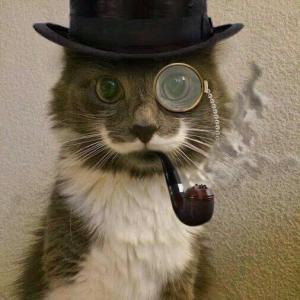 This cat had on a black merino wool morning coat, with a double-breasted dove-gray waistcoat that I would refer to as a British style Cummberbun.   Amazingly, he looked great sporting a black wool Victorian Mad Hatter style top hat.   The type I had only ever seen magicians wear while on stage performing.

I noticed he was wearing a single spectacle eyeglass piece for his left eye while holding in his right paw a classical looking wooden Cain to keep himself upright.   Why a cat needs a Cain is beyond me.

What I really thought was amazing where the Irish knee-high tweed golfing knickers he had on to match his wool suit.

If you were to ask me, Do cats smoke tobacco ?

I might say no, but this cat does.  He was smoking an old vintage gentlemen’s black wooden tobacco pipe.  The aroma really wasn’t that bad, it smelled like cherry.

As he rounds the front of the box I heard him say with a smile:

As I am in shock with a panic sound in my voice.

” The problem is I am seeing a walking, talking cat “

“No worries, Governor ”  In a cheerful voice he says.

” I am Oliver Stanley Biggles-Worth the 6th.”

I looked at him strangely and asked:

I just shook my head in amazement.